Serengeti National Park, in northern Tanzania, is known for its massive annual migration of wildebeest and zebra.

Others veer northeast to the Lobo Hills, home to black eagles. Black rhinos inhabit the granite outcrops of the Moru Kopjes.

Serengeti national park  is well endowed with multiplicities of  what to see  and what to do during Serengeti safari  they range from wildlife done in game drives,  birding safaris, masai cultural encounter,  wildebeest migration, sites, olduvai gorge, moru kopjes,  hippo pools and so many more.

There are many attractions you can see during Serengeti Safari which include the following:

Serengeti national park is a park that is well endowed by mother nature and it major attraction is  the wildlife. One of the major attractions in Serengeti National Park are the large mammals.

Serengeti National Park perhaps habits the highest concentration of large mammals in the world, chances are you will most likely to spots giraffes, elephants, hippos, lions, wildebeests, zebras, antelopes and so much more.

The 500 and more species of birds that call this place home are another sight to behold. Serengeti Safari in Tanzania not only caters for the animal lover but also the twitcher with species like the secretary bird, ostriches, flamingos, eagles and so much more.

Such bird species are also part of the major activities you can enjoy during Serengeti Safari.

The wildebeest migration has been described in so many ways by so many people but above all it is one of the 7 wonders of the world.

This yearly journey of over 1 million wildebeests, zebras and other animal can only be  a great experience during Serengeti Safari tour and maybe its extension the Masai Mara National park in Kenya.

As these animals trek for miles in search of greener pastures, and fresher water, there is no better attraction than this.

The wild beast migration has been one  of the major Activity to do during Serengeti Safari as many travelers have been seen flocking the park to catch a glimpse of this migration.

Serengeti Safari park Tanzania is not only home to a long list of animal s and birds but it is also home to the Masai Mara people whose tribe and traditional practices have barely been touched just like the park itself.

These people still carry out all their rituals, and practices which makes them an exciting and authentic attraction to look forward to while in Serengeti National Park.

The Olduvai gorge is another attraction that is significant and is located in the Serengeti national park.

The Olduvai gorge is where the oldest remains of early man were dug from about a million years ago by Dr Louis leaky the famous East Africa archaeologist, this discovery changed the understanding of the evolution of man.

The moru Kopjes scattered around the Serengeti safari park are a perfect place to catch the black rhinos. These protruding rocks around the park offer shade and disguise for the many animals and predators.

The retina hippo pool where you will find large schools hippos dipping in this pool. They are so many that ever so often fights break up.

The Grumeti river is a popular attraction especially during the wildebeest migration, the site is spectacular as millions of beasts try to cross the river to Masai Mara the river is infested by many crocodiles and it is survival for the fittest as the animals try to make it across.

Sometimes it is all peaceful and calm as animals just take a sip of water from the banks. It is a spectacular attraction.

The Seronera River Valley is another attraction that provides postcard perfect views of the Serengeti safari park. The whole region, surrounding the river, is overflowing with unique flora and fauna.

This valley is a summary of  the entire Serengeti Safari park- there are the rivers, the gorges, the mountains, and the animals.

Serengeti’s scenery is renowned for its grassland plains in the southeast. The northern part is more hilly and rocky. To the west, valleys, rivers and forest can be found.

Several areas in the Serengeti safari park are dotted with ‘koppies’, granite outcrops rising up from the plains. It’s an immense landscape and quite stunning – big sky country that feels like untamed wilderness.

Conditions in the Serengeti are rarely taxing in the daytime during the Dry season (June to October), when the temperature stays nice and warm.

It’s a different story at night, when the mercury can take a deep dive. The heat creeps up a few degrees during the Wet season (November to May), though the odd cold front can introduce a chill.

Overall, wildlife watchers are better off timing their trip to coincide with the drier months (June to October). Aim for June and July if you can, as the incredible wildebeest migration usually tramples the plains at this time.

If you’re keen on seeing predators in action, visit in late January or February. This is the hiatus in the annual rains, when the wildebeests calve. 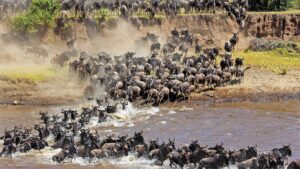 Why Book With Us?

Shalom Safaris is a Tour and Travel Company in Rwanda that provides safaris and travel related services throughout East Africa.